The Last Messiah: More or Less

The Last Messiah: More or Less 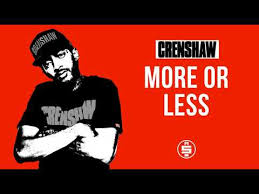 “The Last Messiah” is a blog series dedicated to Nipsey Hussle and his life work. These series of writings will give us the chance to observe Nip and some of his most profound records in no particular chronological order. I admit when I first fell in love with many of the songs I was just vibing and had yet to dissect the lyrics. Now looking back I realized Nipsey often left us a blueprint for the moves he was making in his attempt to decode the matrix, and bring about a better reality for him and the people around him. Hussle may be may be known for his braggadocious raps filled with rich bars reminding of his self made wealth, but some of us will always know him for his rich rhetoric, prolific thoughts and songs full of wisdom. Today we will dive into a song titled “More or Less ” from Nip’s 2013 mixtape titled Crenshaw.

Nipsey wastes no time getting to his message on the track titled “More or Less. ” Nip opens the track with word play that brings about a nostalgic vibe. He raps

“ I’m smoking backs with OG
Pulled the carpet up, made mahogany low key
Know these niggas jealous, envious of my whole team
But I’mma kill these niggas broad day if it’s on me
Fully bossed up, niggas pockets need protein
I ain’t had much but you gotta chase your dream
Wrote it all down in my spot in like ‘03.”

Straight to the point Nip gives you a bit of insight on who is and what he has accomplished for himself and his team. Nipsey’s 2013 release Crenshaw may have been his most popular body of work and he quickly lets the audience know that his success didn’t come over night. He also explains he had nothing much other than the chasing of his dreams and how he wrote it all down in 2003. 10 years prior to the release of the song he is rapping on. Writing things down is an age old practice. In neuroscience they have connected writing with the “generation effect.” The “generation effect ” happens first, when you generate the goal (create a picture in your mind), and second, when you write it down because you’re essentially reprocessing or regenerating that image. Nipsey while often rapping about his success also mentions the fundamental tools needed to be successful in life. Nip continues to fill us in on his vision with bars of clarity.

“We gon fly to Africa, we gon stop in Rome first
Exchange a 100k, and then buy the whole store
And we buy the whole floor, fuck it I just want more
Look I got fans everywhere, we need a globe tour
And I need 100k in stock, that’s a low score.“

No stranger to global success Nip would often rap about traveling abroad and the opportunities that came along with it. I remember searching for concerts and shows for years hoping to catch a live performance While doing so I would always notice that Nip may not have a lot of shows in America but he was transforming into a Global superstar. He also reminds us that we need to be more vested in some of the industries we so often support. Later on in the song Nipsey raps

“ I could turn your block to a free flow
Half-court shot to a freethrow
Impossible is nothing, Nike flow
It’s all in yo mind, it’s cerebral. ”

The Marathon Continues. Please join us as we continue to celebrate “The Last Messiah” who some may know as Nipsey Hussle.